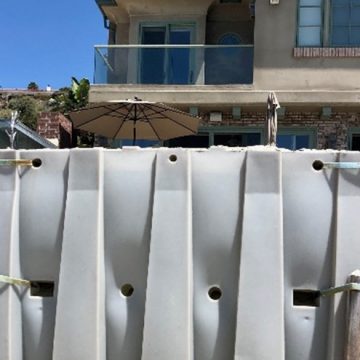 Due to the effects of extreme weather events and climate change, many beachfront developments in Southern California are experiencing rapid beach erosion and shoreline retreat. Rising sea levels and increasing wave action are causing many deleterious effects to California’s coastline, including loss of sensitive habitats, recreational assets, public and private properties, and civil infrastructure. To mitigate these effects, numerous short-term beach erosion mitigation strategies and products have been employed across the Southern California coastline, having a wide range of results. The purpose of this case study is to discuss the performance of various beach erosion countermeasures as short-term beach erosion mitigation solutions at Capistrano Bay Community, a Special Government District located in the City of Dana Point, California.

The Capistrano Bay Community Service District (“The District”) is located along a thin strip of beach between the Pacific Coast Highway and the Pacific Ocean, at the southeast end of Dana Point. The District was formed in 1959, when the Orange County Board of Supervisors voted to approve the request of Beach Road property owners to convert the community into a Special Government District.

The District receives a percentage of the property taxes generated from the community as well as a District User Fee to fund its operations. To fund large-scale capital improvements, the District formed an Assessment District (AD99-1) in 2003, which generated funding for replacement of a roadway, curbs, gutters, and storm drain systems.

The District has suffered notable beach damage from high-energy storm events during high tides on several occasions over the past several decades. Significant storms in 2005 and 2011 resulted in the loss of large volumes of sand. On November 30, 2018, high surf and high tides destroyed a wooden walkway, seawall, and basketball court. The District was most recently affected by a beach erosion event on July 4, 2020, when unusually high tides combined with large swells resulted in local flooding and beach loss.