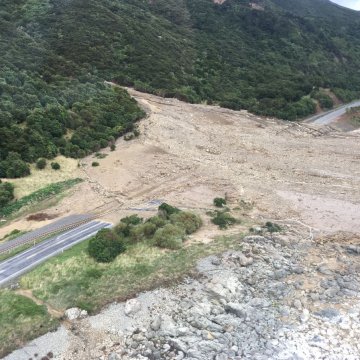 KiwiRail, the NZ Transport Agency and the NCTIR project have won another international award, the American Railway Engineering and Maintenance of Way Associations (AREMA) annual W.W. Hay Award for Excellence. The award recognises the work done to restore the Main North Line, following the Kaikōura Earthquake.

ENGEO staff have been heavily involved with the NCTIR project since 2016, with several members of the team on full-time secondment since January 2017. ENGEO’s Richard Justice, is the Geotechnical Principal in NCTIR for Kaikōura South, being responsible for slope hazard mitigation works for the transport corridor between Oaro and Peketa.

The entry was the first from outside the USA and Canada to win the award. It is an honour to be included alongside amazing previous winners such as the rebuild of rail links and stations damaged by the 9/11 World Trade Centre attack and reconstruction efforts following Cyclone Katrina in 2006.

The NCTIR recovery project has received a number of industry recognitions, including:

Read more about this project here.