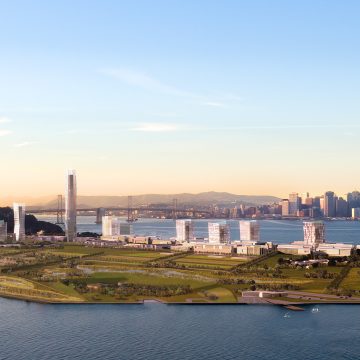 Getting Geotechnical: The Making, Shaking and Remaking of San Francisco’s Treasure Island

San Francisco Bay’s Treasure Island—a flat, 400-acre, rather headstone-shaped island—is entirely artificial, “… constructed by emplacing 260,000 tons of quarried rock in the shoals for the island/causeway perimeter rock walls (a freshwater reservoir was quarried in the rock of Yerba Buena Island). Approximately 23 feet of dredged bay sand filled the interior, was mitigated from salt, and then 50,000 cubic yards of topsoil was used for planting 4,000 trees, 70,000 shrubs and 700,000 flowering plants.” (Wikipedia)

“It’s a very interesting story,” says Uri Eliahu, G.E., president of multinational geotechnical firm ENGEO. “It was built in the 1936/1937 timeframe, with a near-term purpose and a long-term purpose. The near-term purpose was to house the 1939 World’s Fair, which it did—judging from pictures, it must have been quite a spectacle. And the long-term purpose was for the island to become the San Francisco Airport—after the World’s Fair. So three buildings built for the fair were intended for subsequent airport use: the iconic horseshoe-shaped, art-deco building you see when you first drive onto the island was to be the terminal for the airport, and two large hangar buildings, all of which are historic and being preserved. And then what happened, of course, was a little thing called World War II.”

The U.S. Navy’s 1942 seizure of Treasure Island—as a site for Naval Station (NAVSTA) Treasure Island—was more than a little contentious at the time. But 70 years later, NAVSTA Treasure Island use as (among other things) a Naval Auxiliary Air Facility to support helicopters, fixed-wing planes, seaplanes, blimps, dirigibles and airships; a U.S. Navy/USMC electronics school; a “Radar Bomb Scoring Site” and Strategic Air Command (SAC) automatic tracking radar facility; and site for a psychiatric ward used to study and experiment on naval sailors who were being discharged for being homosexual—while remaining as controversial as all military matters—in retrospect might also be viewed as a stroke of good luck.

Had the airport gone forward in the 1940s, as planned, it would have been built on a site that has since subsided substantially in places. With construction technology based on the era’s relatively limited understanding of sea-level rise, geotechnical factors and seismic forces, it could have proved disastrous during the 1989 Loma Prieta Earthquake (i.e., the “World Series Earthquake).

Click the link below to read the full article.