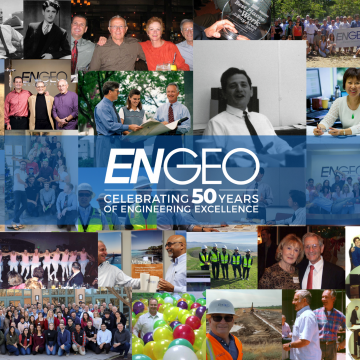 From an 800-square-foot office to 22 offices in three countries, ENGEO celebrates 50 years

ENGEO, the world’s most comprehensive geoscience engineering firm, is celebrating its 50th anniversary this year with milestones that include a 143% employee increase over the past 10 years, and expanding to 22 offices in three countries.

It is a long way from the firm’s modest beginning in 1971 when a geologist and two engineers began work in an 800-square-foot space in Berkeley, California. Now, ENGEO has offices located in California, Nevada, Washington, Guam, New Zealand and Australia. The privately held company—routinely selected as one of the best places to work in the United States—plans on continuing its tradition of innovation and technical excellence for another half-century.

“Our team’s ability to adapt, innovate and challenge the status quo is what’s taken ENGEO from a Bay Area geotechnical consulting firm to the most comprehensive geoscience engineering firm in the world,” said Uri Eliahu, ENGEO’s president and CEO. “For 50 years, ENGEO has created innovative solutions for some of the most complex engineering challenges around the world, and it’s all due to our great employees who truly care and consistently think outside the box. That’s why I’m confident we will continue to improve the world through geotechnical engineering for the next 50 years and beyond.”

“What has made ENGEO truly unique throughout our 50 years in business is our employees,” said Guy Cassidy, the company’s CEO for its New Zealand and Australia operations. “We’re an employee-owned company where the doors are left open and the organizational chart is flipped upside down with the CEO at the bottom and employees having servant leaders, not managers. This commitment to the success of others allows us to serve our clients as they had never been served before, and the long list of awards we have earned for our projects demonstrates both our technical excellence and commitment to clients.”

Among ENGEO’s first major projects was its geotechnical consulting for the Concord Pavilion in 1975, one of the Bay Area’s premier outdoor concert venues. A year later, ENGEO provided geotechnical consulting for the highly exclusive 4,200-acre Blackhawk master-planned residential development and country club in Contra Costa County. Since then, the company has consulted for numerous master-planned communities such as the Dougherty Valley development in Contra Costa County since 1986, the Mare Island redevelopment near Vallejo since 1998 and the massive Newhall Ranch project in Los Angeles County beginning in 2012.

Other significant projects include the Lucas Museum of Narrative Art at Exposition Park in Los Angeles, several extension projects for the Bay Area Rapid Transit, including the recent Berryessa Extension Project in Santa Clara County, San Jose in 2004 and the extension to Pittsburg and Antioch in 1991. ENGEO has an international presence and has been involved with the reconstruction of Christchurch, New Zealand, after the massive earthquake in 2011, and a variety of projects to upgrade the earthquake resilience of the water supply network in Wellington, New Zealand, in 2017.