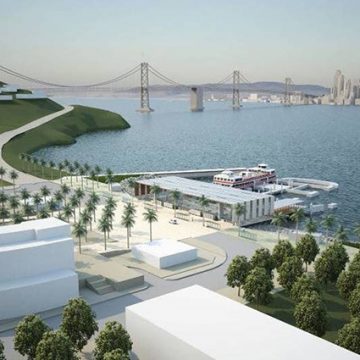 Home/News/From a World’s Fair to a Local Neighborhood: The Transformation of Treasure Island

From a World’s Fair to a Local Neighborhood: The Transformation of Treasure Island

The original island of the pelicans in the San Francisco Bay, Yerba Buena Island sits between San Francisco and Oakland, California. The first lighthouse was built on the island in 1875. During this time, locals used the island to raise goats–for which the island was renamed for a time–and the military soon found use for the space, establishing a naval training station in 1900. A few decades later in 1936, President Franklin Delano Roosevelt ordered the US Army Corps of Engineers to begin dredging the bay to build a new, 400-acre island on the shoals of Yerba Buena, which had previously represented a shipping danger.

Named for the gold that potentially lies in the mud dredged up from the bay’s floor, Treasure island was originally constructed for two purposes: to host the 1939-40 Golden Gate International Exposition and serve as a future second airport for San Francisco’s growing population.  Several permanent structures were erected on the new island including “Building 1”–a 1938 Art Moderne building–and the terminal building meant to house and showcase new Pan American Airways Clippers.

After the Golden Gate International Exposition ended, plans to use the development as a new airport fell out of favor and the Navy began using it as a major training station for World War II all the way through the Cold War. In 1997, the naval station on Treasure Island was closed, and the hangar buildings were converted for other uses such as sound stages for television and movies. Since this time, Treasure Island and its neighbor Yerba Buena have maintained a population around 2,000 residents. In addition, Treasure Island is home to several restaurants, schools, arts and athletics organizations, and a Job Corps campus.

Now, both Yerba Buena and Treasure Islands are poised to return to a similar level of prestige that came with the Golden Gate International Exposition.  The Treasure Island/Yerba Buena Island Development Project has plans to create a new San Francisco neighborhood with homes offered at below-market rates, extensive parks and open space, public art, hotels, restaurants, and other elements that would make the development an ideal destination for both San Francisco residents and tourists alike. To manage this development, the Treasure Island Development Authority (TIDA) began the planning stages of the project around 2011.

From a geotechnical perspective, building a new development on top of an island that was dredged from the bay’s floor over half a century ago was a tricky endeavor. To lead the geotechnical work on the development project, ENGEO started studying the island in 2003. ENGEO, one of the most comprehensive geoscience firms in the world, is serving as the Geotechnical Engineer of Record. As such, they have been working in a number of areas throughout the different phases of the project, doing everything from conducting the design-level geotechnical study to designing and overseeing a massive ground-improvement program, to designing new building foundations to providing construction-phase quality control, to setting up a Caltrans-certified materials testing lab on the island.