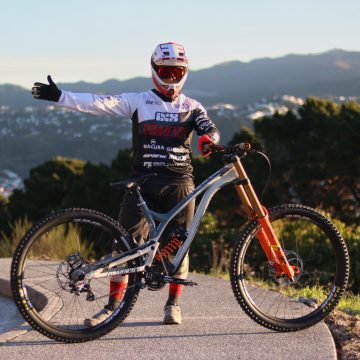 Supporting Select Contracts with a new adventure park in Porirua has highlighted some exciting opportunities to not only support the project but to support the future users of the bike park.

Bryn Dickerson is a pro-elite downhill mountain bike racer with an already successful career at 26 years of age. The Porirua born, ex-Continental Champ and Top 20 World Racer was completing his most successful season at the 2018 World Championship when he came off his bike during a practice run, avoiding a broken bone, yet tearing two ligaments and rupturing an artery in his ankle.

After surgery and 7 months in a moon-boot, Bryn is gearing up again to compete all over Europe, with his first stop being the 2019 World Championship in Fort William, Scotland.

Unless you are the best of the best, downhill mountain biking is a fully self-funded sport.

This is where ENGEO has stepped in to help Bryn back on his bike, and along the track to secure future wins for New Zealand. ENGEO is looking forward to going along for the ride, being part of Bryn’s journey as a top athlete in this sport and advocate for the upcoming Porirua Adventure Park!